Click on the image above to purchase the book.

VMF member Anna Filameno is a word painter with a vast palette… sometimes romantic and poetic, sometimes explosive! Reading her vignettes is like being on a rollercoaster ride… and when you catch your breath you’re ready for more!”

The following is a chapter from her latest book SO YOU WANNA BE ITALIAN? An Artist’s Journey Exploring Her Roots

The following is a chapter she wrote on Vito Marcantonio

“You only live once and it is best to live one’s life with one’s conscience rather that to temporize or accept with silence those things one believes to be against the interests of one’s people and one’s nation.”

What is it like to be inside the wind?…

A mind like yours is mercurial, capricious… and sometimes creates a tidal wave of such enormous dimensions… so compelling that we are forced to give it relevance… We are filled with a sense of optimism… and tremendous power…

You VITO MARCANTONIO… urban maverick… were that wave… that tsunami. You lived all your working hours in the dream you belonged to. The rhythm of the streets was your mantra… the immigrants, poverty… the wild and boisterous sounds the wind made as you rushed into your orbit… were all part of the adventure.

Could you have done it all?

The mad attempt to fight the system… defending civil rights and the workingman… and the constant struggle to transform politics?

“I fully realize,” you said, “that men must pay the great price in order to adhere to ideals. I fully realize that one needs guts to pursue such a course…”

And guts you had, Vito

How many streets did you walk down to find the same scattered silences, the same empty eyes staring back at you… the same exaggerated disappoints and contradictions… the same paradoxes. How many of you got lost in the complexity of the indigence that abounded on Ninety Sixth Street to one hundred and Twenty- fifth Street… from Lexington Avenue to the East River?…

These Italians, Puerto Ricans, Jews, and African Americans? How much of yourself did you see in them?… such that you could not let go? Perhaps this was your way of affirming life… a way of freeing yourself from your past.

You were all part of the same fabric

VITO MARCANTONIO… Fighter for the underprivileged…

And when you felt most alone… surrounded by great opposition… that’s when you fought the hardest. That was when you remained true to yourself… You lived most deeply when you faced the onslauight.

“I vote my conscience.” You said.

And indeed you did, Congressman…

You, VITO, have passed through your transitions nobly… and the triumph of your ideals is stamped in history.

There are times when greatness becomes visible and it lives for a while. It has a moment in the sun and becomes luminous… and we have no choice but to let it dazzle us… and then it slips away… leaving us in a state of reverence.

The streets were your home, VITO, your Mecca to defend. But you had a rendezvous with destiny, didn’t you? And on that rainy day in New York City, your heart made an inevitable and uncompromising conquest. You lost the battle. They found you on the very streets you loved…

The streets that finally claimed you

SO YOU WANNA BE ITALIAN?

An Artist’s Journey Exploring Her Roots

So You Wanna Be Italian? – An Artist’s Journey Exploring Her Roots is a series of vignettes on various famous Italian ﬁgures who have had inﬂuence on the life of Anna Filameno. Anna gives us a unique experience as she explores her Italian roots. Each page has a beautiful background graphic art illustration that helps tell the story of each vignette.
Through a tour-de-force of powerful images and experiences, sometimes dreamlike and poetic, sometimes biographical, we learn the potent force Italian figures such as Valentino, Fellini, Sinatra, Anna Magnani, Aradia “la strega”… and many others had on her life… how in exploring her relation to them Anna more fully realized her relationship to herself… and how we can be inspired to do the same in our own lives.
The author will be giving a book presentation that includes readings by performance artists at the Italian American Museum… Don’t miss it! 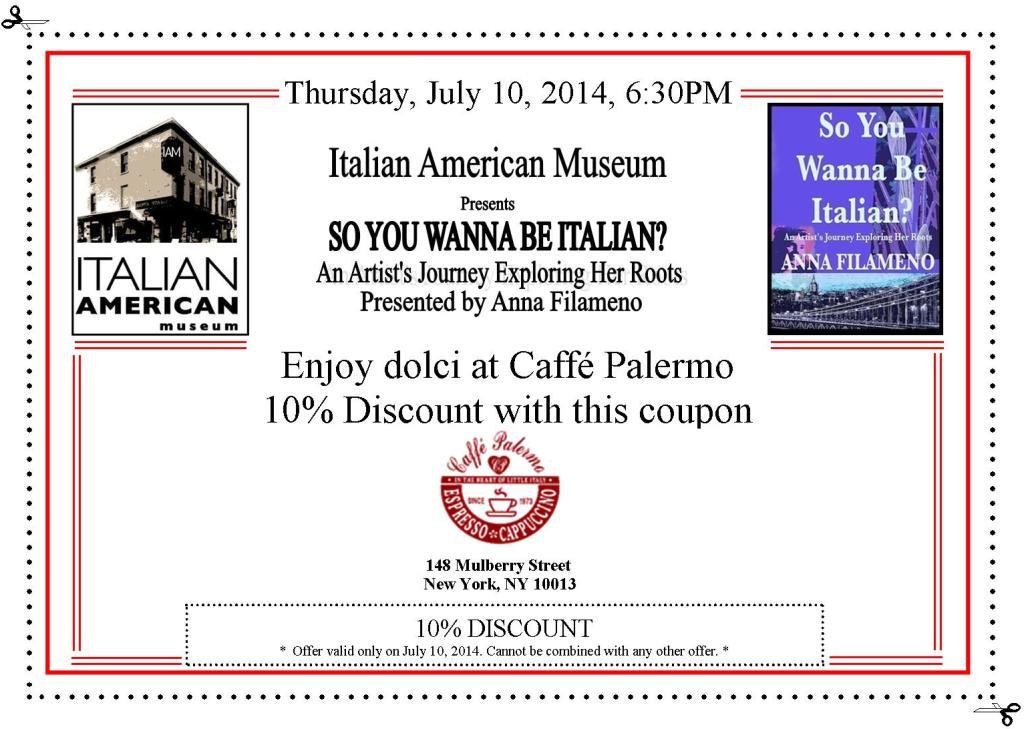 The IAM is chartered by the University of the State of New York and has a 501(c)(3) designation from the IRS.

Explore our previous posts below.